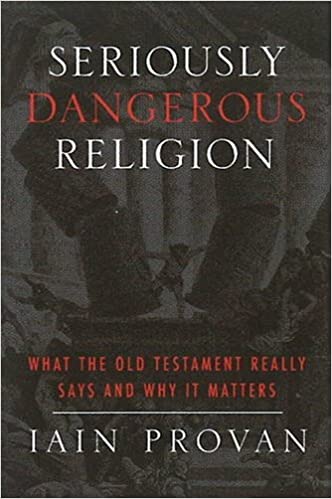 Moses was not writing to YOU and the folks who put his manuscripts together weren’t either. Nevertheless, GOD was! Would it not be in the best interest of all of us to journey back into their culture and have a look see?

Iain Provan has been the Marshall Sheppard Professor of Biblical Studies at Regent College since 1997. Born and educated in the UK, Dr. Provan retains strong family, academic, and church connections with his homeland. He received his MA at Glasgow University in Mediaeval History and Archaeology, his BA from London Bible College in Theology, and his PhD from Cambridge, where his thesis focused on the books of Kings, and was subsequently published as Hezekiah and the Books of Kings. His academic teaching career took him to King’s College London, the University of Wales, and the University of Edinburgh, where he was a senior lecturer in Hebrew and Old Testament Studies. Dr. Provan has written numerous essays and articles, and several books including commentaries on Lamentations, 1 and 2 Kings, Ecclesiastes, and Song of Songs, and co-authored with Phil Long and Tremper Longman A Biblical History of Israel (John Knox Press, 2nd edition, 2015). He has also published Against the Grain: Selected Essays (Regent College Publishing, 2015), Seriously Dangerous Religion: What the Old Testament Really Says and Why It Matters (Baylor University Press, 2014), and Convenient Myths: The Axial Age, Dark Green Religion, and the World that Never Was (Baylor University Press, 2013). His most recent books are Discovering Genesis (Eerdmans, 2016) and The Reformation and the Right Reading of Scripture (Baylor University Press, 2017). A new book will appear in the summer of 2020: Seeking What Is Right: The Old Testament and the Good Life (Baylor University Press). Dr. Provan is an ordained minister of the Church of Scotland; a Life Member of Clare Hall, Cambridge; and the recipient of an Alexander von Humboldt Research Fellowship. He and his wife, Lynette, have four children. He is also a qualified Provincial B Licence soccer coach (BC) and ARA rowing coach