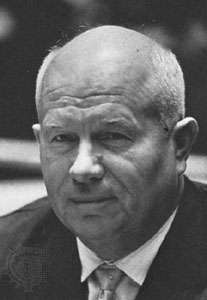 ← How the Serpent Became Satan →

From Victor Sharpe (who is passing along information…perhaps you will too?) I was born in 1959

Of special note: I understand biblical patterns that follow humanity and the chaos people create when in opposition to Almighty GOD. We don’t know how to create a different type of opposition. We continue repeating the pattern because, outside of order—is disorder. Disorder is almost always the manner by which nations are tossed into the history books. I think it just might be our turn if we continue to honor the words of Nikita Khruschev in opposition to the word(s) of GOD

Sixty years ago people said it will NEVER happen. Well, is it happening? Hard to believe it was that long ago and it looks from where we are now it is coming true. Just think back on what we have personally witnessed since 1959. Old Niki told it like what all of us have witnessed.

Almost exactly sixty years ago since Russia’s Khrushchev delivered his message. Do you remember September 29, 1959?  THIS WAS HIS ENTIRE QUOTE:

“Your children’s children will live under communism, You Americans are so gullible.  No, you won’t accept communism outright; but we will keep feeding you small doses of socialism until you will finally wake up and find you already have Communism.  We will not have to fight you; We will so weaken your economy, until you will fall like overripe fruit into our hands.”  “The democracy will cease to exist when you take away from those who are willing to work and give to those who would not.”

Do you remember what Russia’s Khrushchev said in 1959? Remember, socialism leads to Communism. So, how do you create a Socialistic State? There are 8 levels of control; read the following recipe:

1) Healthcare – Control healthcare and you control the people.

2) Poverty – Increase the poverty level as high as possible, poor people are easier to control and will not fight back if you are providing everything for them.

3) Debt – Increase the debt to an unsustainable level. That way you are able to increase taxes, and this will produce more poverty.

4) Gun Control – Remove the ability to defend themselves from the Government. That way you are able to create a police state.

5) Welfare – Take control of every aspect (food, housing, income) of their lives because that will make them fully dependent on the government.

7) Religion – Remove the belief in God from the Government and schools because the people need to believe in ONLY the government knowing what is best for the people.

8) Class Warfare – Divide the people into the wealthy and the poor. Eliminate the middle class This will cause more discontent and it will be easier to tax the wealthy with the support of the poor

For the younger people: