William H. Carney: The First Black Soldier To Earn The Medal of Honor

← Candace Owens Tells the Truth, Bette Midler and Others Believe the Media A Little Family History From Momma's Side →

Since 1976, every U.S. President has designated the month of February as Black History Month.

At Mercury One and WallBuilders, we’ve preserved many of the stories of Black Heroes that have been left out of the mainstream history books and largely forgotten in our culture today.

These are stories that help teach our children about patriotism, respect, honor, integrity, faith, courage and so much more. Today, as part of Black History Month, I want to introduce you to one of these forgotten heroes: William Carney. 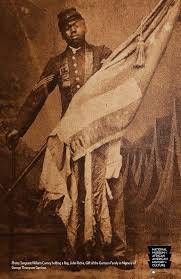 William Carney was born into slavery in Norfolk, Virginia in 1840. His father escaped to freedom on the Underground Railroad and then purchased the family out of slavery. By the age of 15 Carney was preparing to be a Christian minister.

Several years later in 1863 when President Abraham Lincoln issued the Emancipation Proclamation, the Union began actively recruiting black volunteers for the military. With an opportunity to fight for the abolition of slavery, Carney put aside his desire for preaching and became one of 45 individuals who joined the Morgan Guards, later to become Company C in the famous Massachusetts 54th.

The Mass 54th eventually ended up in South Carolina, where they participated in the Battle of Fort Wagner, on the shores of the harbor in Charleston. As the battle began, 600 men from the Mass 54th waited at one end of a narrow 60-yard wide, half-mile long stretch of beach leading to the fort. During the day, Union ships had moved up offshore to within 300 yards of the fort. Their cannons pounded the Confederate stronghold for eight hours to soften its defenses.

The Mass 54th awaited orders to move out, which finally came. With fixed bayonets, they began running toward the enemy. But the Union bombardment had failed to weaken the fort, and since the Confederates had hidden in bomb-proof shelters, they suffered few casualties.

As the Union troops drew near, the Confederates emerged and the 54th ran directly into heavy cannon fire and a torrent of bullets that caused extensive casualties. Among those who fell was Sergeant John Wall, the man in charge of carrying the United States flag.

Sergeant William Carney, who had been running next to Wall, dropped his rifle and caught the flag before it could hit the ground. As Carney carried the flag forward, he was shot in the leg but continued to lead the attack. Suddenly surrounded in a surprise attack by Confederate soldiers, Carney quickly wrapped the flag around its staff and he and the others retreated back down the embankment. 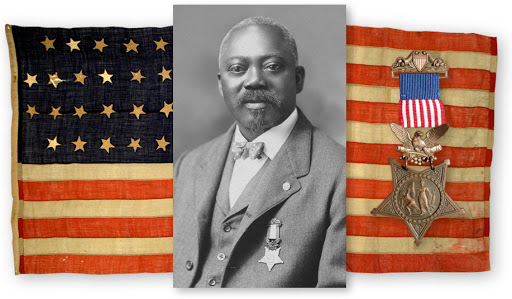 Wading through chest deep water, he held the flag high, keeping it aloft and dry. As he got out of the water he was shot twice more, once in the chest and again in the leg. Still he continued, resolved not to let the flag fall. A white soldier from a New York regiment came to his aid and pleaded with the injured Carney to let him carry the flag, but Carney quickly replied, “No one but a member of the 54th should carry the colors!” Still carrying the US flag, Carney was shot again—for the fourth time—this time narrowly escaping death as the bullet creased his skull. At last, he and the New Yorker reached the safety of Union lines, where medical personnel treated his wounds.

All the while, Carney kept the flag with him. When he finally returned to the 54th, he was greeted by cheers. Before collapsing from his wounds and exhaustion, he breathlessly proclaimed, “Boys, I only did my duty. The flag never touched the ground!”

Word of the Mass 54th and their courage under fire spread across the nation. Black enlistments soared, reaching almost 200,000 by the end of the conflict, or about 10% of the total Union force. And as a result of the Mass 54th, in June 1864 Congress equalized pay for soldiers—the same for black and white. On May 23, 1900, some 37 years after the Battle of Fort Wagner, President Teddy Roosevelt awarded William Carney the Medal of Honor.

Our hope is that by telling you Carney’s story, we can keep it alive and help preserve it for generations to come.