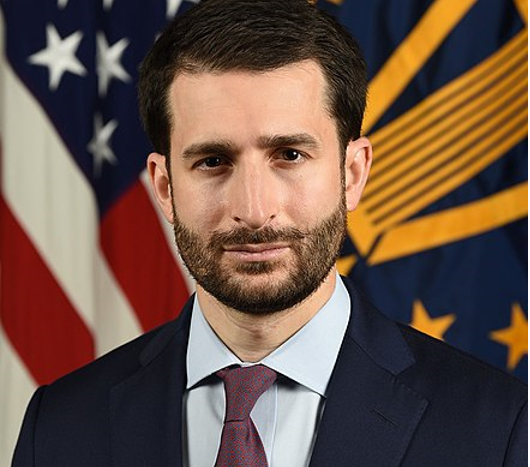 ← The Historical Truth About Civil Rights The first Thanksgiving took place in the land of Israel more than 3,000 years ago. →

This is an interesting development within the Trump Administration

“Ladies, Gentlemen & Patriots—let me introduce the man we believe to be ‘Q’—Trump’s secret weapon—Ezra Cohen-Watnick”  source

Mr. Ezra Cohen-Watnick became  Acting Under Secretary of Defense for Intelligence and Security on Nov. 10, 2020.  He had served as the Acting Assistant Secretary of Defense for Special Operations and Low-Intensity Conflict. In that role, he was responsible for all policy formulation and oversight for Department of Defense counterterrorism, special operations, counternarcotics, detainee affairs, peacekeeping, humanitarian assistance, and stability operations. Separately, Mr. Cohen provided oversight of all organize, train, and equip activities for United States Special Operations Command, and ensured alignment of a $14 billion budget with the National Security and National Defense strategies.

Mr. Cohen previously served as the Deputy Assistant Secretary of Defense for Counternarcotics and Global Threats. In this capacity, he led the Department of Defense’s global counternarcotics and threat finance policies and operations, among other global issues, overseeing a budget of over $1 billion.

Before becoming Deputy Assistant Secretary of Defense for Counternarcotics, Mr. Cohen served in several roles within the United States Government, including within the Department of Defense and National Security Council. At the National Security Council, Mr. Cohen served as the Special Assistant to the President and Senior Director for Intelligence Programs. In this role, Mr. Cohen was principally responsible for the implementation of the President’s National Security objectives through the vast array of intelligence community capabilities. Additionally, Mr. Cohen was the United States Government’s strategic level policy coordinator for all intelligence programs and sensitive activities, including covert action, human intelligence, counterintelligence, electronic surveillance, information operations, special reconnaissance, and intelligence sharing.

During his previous service in the Department of Defense, Mr. Cohen completed a number of overseas assignments in Latin America and South Asia.

In the private sector, Mr. Cohen was the Senior Director for Strategic Initiatives at Oracle Corporation, where he advised the Chief Executive Officer on national security issues. Additionally, Mr. Cohen was responsible for an international effort to deploy Oracle’s high-security cloud computing technology to allied governments, primarily within NATO.

Mr. Cohen holds a Bachelor of Arts in History and Political Science from the University of Pennsylvania.