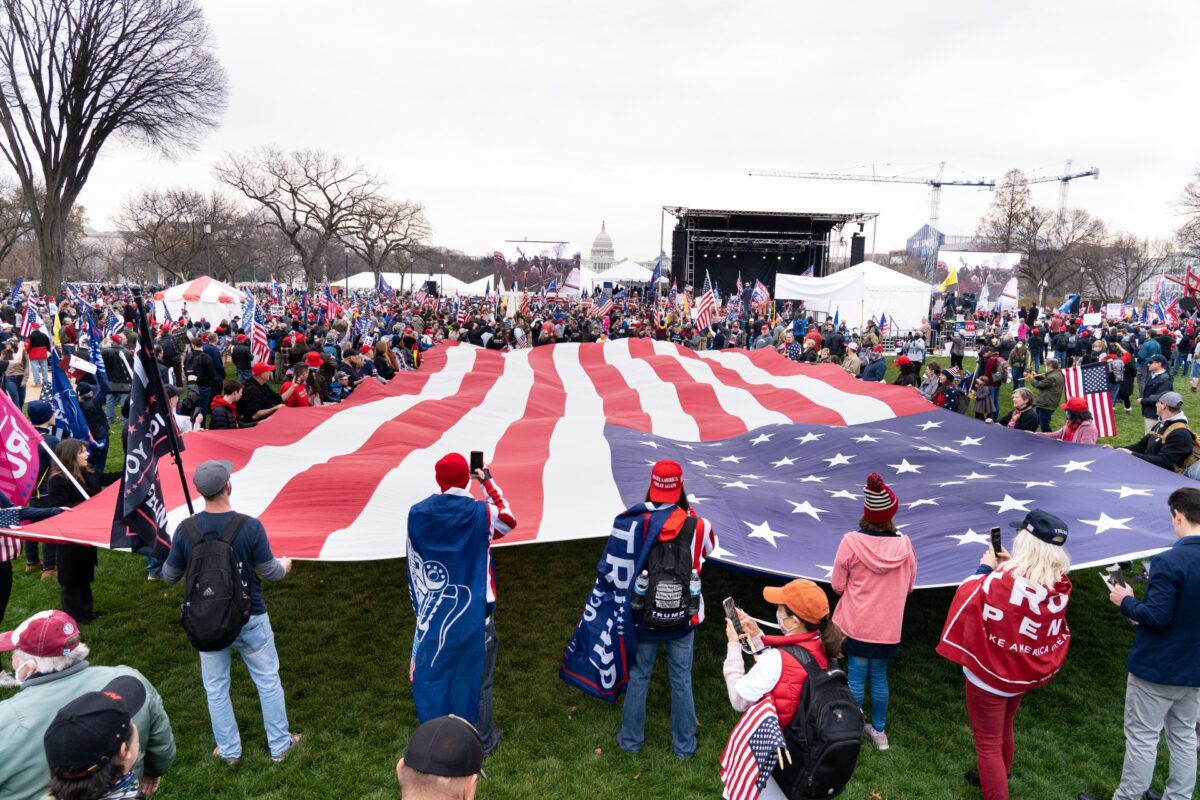 ← Disbelief, Belief...Back to Hanukkah The "Garden" In Eden is a Temple, Now About Those Trees and "In The Beginning" →

BY BOWEN XIAO AND CATHY HE

WASHINGTON—Tens of thousands of people converged at the Capitol and the Supreme Court on Saturday—amidst blaring musical horns, red, white, and blue apparel, and waving American flags—to take part in rallies calling for greater transparency in the 2020 election.

People traveled to Washington from all over the country to show their support for President Donald Trump. Many there expressed that the election process was handled improperly and is fraudulent. Some are optimistic that the tide will turn, including some high-profile supporters.

“Courts do not decide who the next president of the United States will be,” said former national security adviser Michael Flynn. “There are paths that are still in play.”

“We are in a crucible moment in the history of the United States of America,” he added.

The U.S. Supreme Court on Friday rejected Texas’ bid to challenge the 2020 election results in four battleground states. Justices opined that the Lone Star State lacked legal standing—or capability—to sue under the Constitution because it has not shown a valid interest to intervene in how other states handle their elections.

“We’re only asking to just show us a little transparency,” said Flynn, who spoke outside the Supreme Court and later at Freedom Plaza. “Why not recount? Why not look at the signatures, Why not look inside these [voting] machines. Why not? what are they afraid of?”

Flynn called himself a “product of an unjust system” and said the current battle for the election “is about the fabric of the constitution of the United States of America.”

Trump on Nov. 25 pardoned Flynn after a yearslong case relating to the Russia investigation. Flynn had pleaded guilty to lying to the FBI about speaking to a Russian diplomat during Trump’s 2016 transition period. But Flynn, a retired three-star general, withdrew his plea before sentencing.

Different events, marches, and rallies took place throughout the day, starting from 9:30 a.m. Participants often shouted “Stop the Steal,” a common slogan among Trump supporters, and also the name of some of the grassroots movement organizing the event.

The barrage of rallies came before the Dec. 14 deadline for the Electoral College vote.

At around noon, Trump flew over Freedom Plaza in Marine One as he headed north to West Point to attend the annual Army-Navy game.

“Wow! Thousands of people forming in Washington (D.C.) for Stop the Steal. Didn’t know about this, but I’ll be seeing them!” Trump said in a Twitter post in the morning.

Sebastian Gorka, who served as deputy assistant and strategist to Trump in 2017, said what’s at stake is more than just a single election.

“If we don’t stop the theft of this election then we will never ever have a free and transparent election again in America,” he told The Epoch Times. “There is a rot at the core of American institutions and it’s up to us to make a difference.”

Gorka, who spoke at Freedom Plaza, said he believes the state legislatures now play the largest and most significant role.

“The constitution is clear: it’s not CNN, it’s not governors, it’s not the Supreme Court. It is the state Houses in America,” he said. “The state Houses cannot certify a clearly fraudulent election.”

Several legal challenges are underway that contest the results of the election. Attorney Lin Wood has filed an appeal to the Supreme Court asking the justices to review his case that argues Georgia’s 2020 presidential election was “unlawful.”

His request to the nation’s top court was filed on Tuesday shortly after the U.S. Court of Appeals for the 11th Circuit upheld a decision to dismiss his case due to the lack of legal standing to bring the case. The Supreme Court docketed Wood’s petition for a writ of certiorari—the request to review the case—on Friday.

The Wisconsin Supreme Court recently agreed to hear an appeal by the Trump campaign over a challenge to the result of the presidential election recount in Milwaukee and Dane counties.

Georgia State Rep. Vernon Jones, a pro-Trump Democrat, urged his colleagues in the state legislature to take a stand.

“They need to support a free, fair, and transparent election,” Jones told The Epoch Times at Freedom Plaza. “They need to be vocal about it. It’s not about certification. It’s about rectification.”

Georgia on Dec. 7 re-certified its election results for Democratic nominee Joe Biden following a recount, although Coffee County said it can’t certify its results after the second statewide recount because it wasn’t able to duplicate the official result on its voting machines.

“I call on the secretary of state [of Georgia] to get it right, and we need to go into a special session as well,” Jones said.

Mike Lindell, founder and CEO of MyPillow, implored people to stand up and speak out about their concerns about the election.

“We need to get the word out today that this fraud is real,” Lindell told The Epoch Times at Freedom Plaza.

“We’re in a spiritual battle, this country.”

He urged people to not lose hope after the Supreme Court’s ruling yesterday, saying there are several other legal cases going ahead aimed at disputing the election results in battleground states. “Everyone’s going to see it. The whole world is going to see it,” Lindell said, referring to the evidence of election fraud produced in these lawsuits.

Republican Doug Mastriano, a Pennsylvania state senator who hosted the first public hearing regarding election integrity, told The Epoch Times that his office has heard from thousands of people across Pennsylvania about various election irregularities, such as being denied entry to polling places and being told that they mailed-in a ballot when they didn’t.

Mastriano said the Republican Party as a whole needs more courage going forward: “We’re on the side of righteousness, and we need to fight forward politically, and not just roll over.”

But he has faith that the tide is turning.

With reporting by Charlotte Cuthbertson