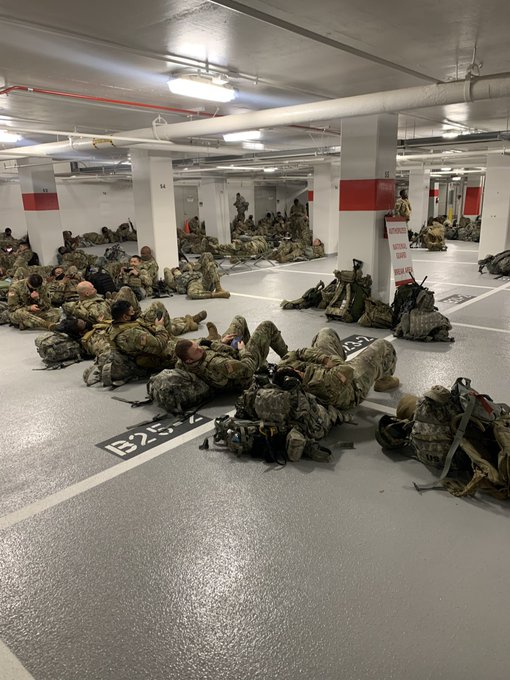 ← Secure Messaging Apps (We Really Are Being Watched) 501C3 Servants, The Modern Church →

Thousands of National Guardsmen were forced to vacate congressional grounds on Thursday and have been photographed having to sleep in parking garages while temperatures in the nation’s capital were set to dip down to near-freezing temperatures.

The photos of the living conditions that the National Guardsmen were forced to endure come after Democrats took complete control of the federal government this week following Joe Biden being sworn in as the nation’s 46th president.

“Yesterday dozens of senators and congressmen walked down our lines taking photos, shaking our hands and thanking us for our service,” a National Guardsmen told Politico. “Within 24 hours, they had no further use for us and banished us to the corner of a parking garage. We feel incredibly betrayed.”

“All National Guard troops were told to vacate the Capitol and nearby congressional buildings on Thursday, and to set up mobile command centers outside or in nearby hotels, another Guardsman confirmed,” Politico reported. “They were told to take their rest breaks during their 12-hour shifts outside and in parking garages, the person said.”

“Speaker Pelosi personally met with the Secretary of the Army to demand 14,000 National Guard troops be deployed to the Capitol,” a source familiar with the security discussions at the Capitol told The Daily Wire in a statement. “But there was no logistical plan provided by the Speaker’s office on where the service members would sleep.”

Numerous lawmakers expressed outrage over the photos and immediately offered their offices to the National Guardsmen.

“Simply unacceptable. You’re always welcome in my office,” Sen. Joni Ernst (R-IA) wrote on Twitter. “As a former Iowa National Guard member, I know how hard it is to wear those boots. Thank you for your service everyday.”

“We should be grateful to the members of the National Guard who are here securing the Capitol,” Sen. Marco Rubio (R-FL) wrote on Twitter. “I don’t know who ordered them to go sleep in a garage and can’t understand why they would do that. It needs to be reversed.”

“This is unacceptable,” Sen. Rick Scott (R-FL) wrote on Twitter. “These men and women are serving our nation and should be treated with the respect they deserve. I have directed my team to help in any way we can, including offering our office space in D.C., to support these brave individuals in their mission.”

“We’ll get to the bottom of this and get it fixed. Congress is in session, but buildings are still closed to public, so there’s plenty of room for troops to take a break in them,” Sen. Tom Cotton (R-TN) wrote on Twitter. “And with the inaugural over, we should start getting the Guardsmen back to their families, jobs, and communities anyway. The extreme security measures of the last couple weeks can be substantially reduced.”

House Minority Leader Kevin McCarthy (R-CA) wrote on Twitter: “Speaker Pelosi and Majority Leader Schumer—why are American troops who are tasked with keeping security at the Capitol being forced to sleep in a parking lot? They deserve to be treated with respect, and we deserve answers.”

Senate Majority Leader Chuck Schumer (D-NY)  wrote on Twitter: “If this is true, it’s outrageous. I will get to the bottom of this.”

“Unreal. I can’t believe that the same brave servicemembers we’ve been asking to protect our Capitol and our Constitution these last two weeks would be unceremoniously ordered to vacate the building. I am demanding answers ASAP. They can use my office,” Sen. Tammy Duckworth (D-IL) wrote on Twitter. “I meant ASAP when I said it. Just made a number of calls and have been informed Capitol Police have apologized to the Guardsmen and they will be allowed back into the complex tonight. I’ll keep checking to make sure they are.”

This is a developing news story, refresh the page for updates.

The Daily Wire is one of America’s fastest-growing conservative media companies and counter-cultural outlets for news, opinion, and entertainment. Get inside access to The Daily Wire by becoming a member.