The Moronic Boycotts of Israel 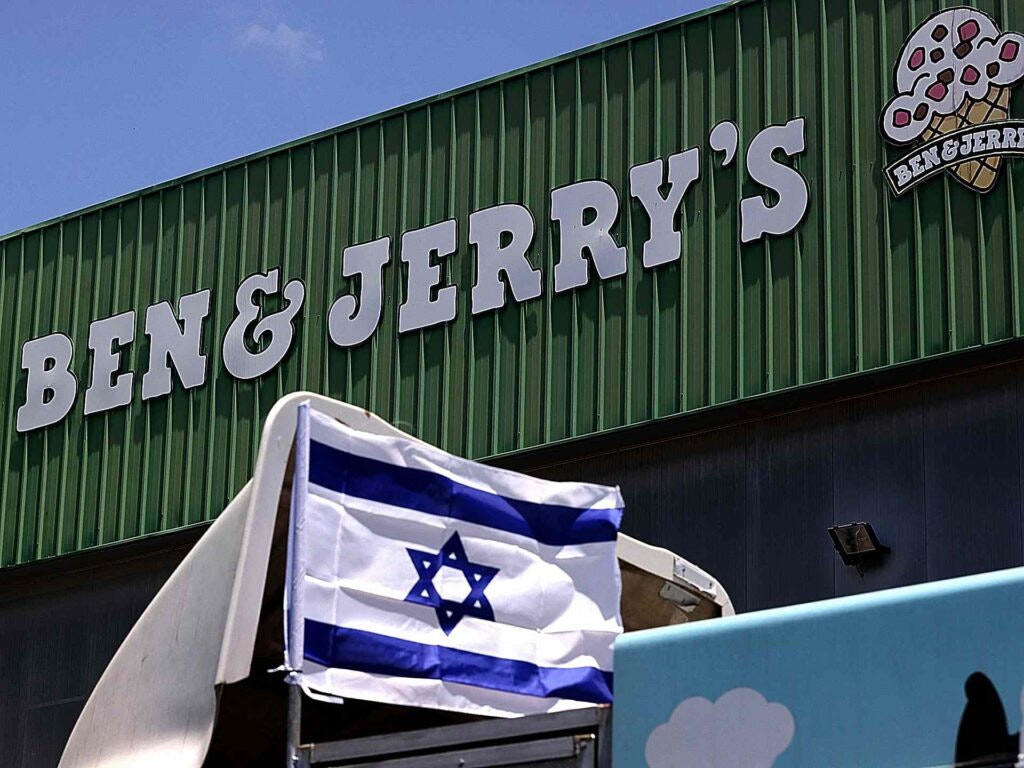 I am an American who is black! In other words, I have no idea what African blacks, living in Africa, eat for dinner!

I have for nearly 45 years peeled back the layers of deception, revisionist history, church antisemitism and religious pogroms that have plagued the Jewish people. Likewise, I have studied the Arab Slavers along with the factual history of the American slave markets where both, black and white southern slave owners, involved in the buying and selling of people is recorded.

The global cabal and international ignorance concerning the nation of Israel and the Jewish people has many, many tentacles that reach through the centuries. In both areas of study the one thing that carries the insanity through the pages of history is ignorance! Being black forced me to undress ignorance by appreciating the value wisdom offers. I learned how to do this by studying for myself. In so doing, I realized the honor in being a beneficiary of freedom as opposed to a descendant of slavery.

For me, man-made religion and the god-complex that tyrants use to divide & conquer, to enslave or annihilate have to remove wisdom in order to succeed! We are watching manufactured racism and ageless antisemitism, “Power Up” chaos with a virus tossed in!

Ben and Jerry decide to jump into the fray because, they sell Ice cream (?) Ignorance has no limits!

I don’t purchase, eat or recommend Ben and Jerry’s ice cream, their stupidity leaves a bad taste in my mouth!

(Thanks Victor for sharing)

The real scoop? How Jews won’t lick the demonization of Israel

The point about the attack by Ben & Jerry’s, as with all boycotts of Israel, is that the main issue is not the boycott. It’s the thinking behind it. Op-ed.

(JNS) In attempting to defend itself against persistent bigotry, the Jewish Diaspora repeatedly thinks with its heart, rather than its head, and consequently misses the key point. Ben & Jerry’s has announced that it will stop selling its ice-cream in Judea, Samaria and eastern Jerusalem, areas that it regards as illegally occupied by Israel.

As a result, the company is being boycotted in turn by people who are refusing to consume ice-cream flavored with malice. In the United States, some supermarket chains are registering their protest by reducing or halting their sales of the product.

Such fury and disgust among Israel-supporters is more than justified. Ben & Jerry’s reasons are spurious and make no sense even by their own lights. They say selling their ice-cream in “occupied Palestinian territory” contravenes their “values.”

Of course, though, the claim that this is just a protest about the disputed territories is a fig-leaf. Omar Barghouti, the founder of the BDS movement, has acknowledged that the strategy is to eradicate Israel from the map altogether.

The chairman of Ben & Jerry’s board, Anuradha Mittal, reportedly has form as a virulent Israel-basher. According to NGO Monitor, in June 2021, she signed a petition to U.S. Secretary of State Antony Blinken demanding that he halt weapons sales to Israel. In 2019, she tweeted: “calling for Congress not to have allegiances to foreign countries (Israel) is not anti-Semitic.”

She has even attacked the company’s parent body, Unilever, for acting without her board’s approval during this furor in pledging to continue selling Ben & Jerry’s ice-cream in Israel, even though it did not say it would sell it in the disputed territories. The board, said Mittal, had wanted to “release a different statement … that made no reference to continued sales in Israel.”

So Ben & Jerry’s has revealed itself to be poisonously bigoted against Israel. Boycotting its ice-cream is therefore a justified expression of disgust.

Lawsuits that are being threatened on the grounds that the company will be breaking American anti-boycott laws are timely and useful, and will put Unilever under pressure through an embarrassment it clearly never sought and must be fervently wishing would now disappear.

Nevertheless, this emotional reaction by the Jewish world misses the most important and hard-headed issue. For many people oppose this boycott while nodding along to its premise that Israel is an illegal occupier of the disputed territories and is thus repressing Palestinian Arab human rights.

This is true of the Biden administration, which has given Palestinian rejectionism a shot in the arm by restoring funding and diplomatic recognition to the Palestinian Authority but whose State Department has reiterated that “we firmly reject the BDS movement, which unfairly singles out Israel.” And that Janus-faced position is true of other governments and much of the Western media, too.

People oppose boycotts on various grounds, including the fact that they punish ordinary people on all sides. Indeed, some may be making this exact objection to the boycott of Ben & Jerry’s that’s now underway.

And even if they do sympathize with boycotting its tubs of “Chunky Monkey” or “Chubby Hubby,” their own attitude to Israel may still be problematic.

Let’s put it this way. Suppose the boycott and lawsuits directed at Ben & Jerry’s and Unilever force the company to resume ice-cream sales in the disputed territories. What then? Residents there will once again be able to buy that product. But does anyone imagine that outcome will get us all very far, even if Mittal were to get the boot?

Throughout the West, innumerable companies, universities, government bodies, professional organizations, the arts and other cultural institutions are stuffed with people who believe that Israel has no right to exist at all; and they contain even more people who believe that although Israel may have such a right, it routinely deprives the Palestinian Arabs of theirs.

The point about the attack by Ben & Jerry’s, as with all boycotts of Israel, is that the main issue is not the boycott. It’s the thinking behind the boycott.

After all, boycotts are in themselves a reasonable response to despicable behavior, which is why many think that in all conscience, the West should boycott the Beijing winter Olympics.

Not to do so will give a powerful boost to a tyranny that is posing an increasing risk to the world, and will also make the West inadvertently complicit in the internal repression and human-rights outrages being perpetrated by the Chinese Communist Party.

The terrible thing, though, is that even some of those who oppose the Ben & Jerry boycott (not to mention the boycotters themselves) think that Israel is similarly despicable. That’s because they’ve swallowed the falsehoods and distortions about Israel that now drive not just the boycott movement but much Western opinion.

They believe that the Palestinians were the indigenous people of the land of Israel who were displaced by the Jews; that there is such a thing in international law as Palestinian land; that Israel is in illegal occupation of some or all of that land; and that it is only Israel that stands in the way of the obvious “two-state” solution to the Middle East conflict.

All these claims are falsehoods and distortions, which have wickedly reframed Israel in much of the Western mind as a regional aggressor identified with injustice and contempt for the rule of law. And yet the Jewish world, including the State of Israel, is noticeably reticent about demonstrating that these claims are the very reverse of the truth.

It should be constantly hammering home to the world the fact that the indigenous people of the land of Israel are the Jews while the Palestinians are the would-be colonizers; that the notion of Palestinian Arab rights to any of that land is a legal and historical fiction; and that Israel liberated the disputed territories from the truly illegal occupation of those lands by Jordan between 1948 and 1967.

It should be constantly hammering home to the world that the Palestinian Arabs reveal by their words, actions and insignia that their aim remains the obliteration of Israel; that the “two-state solution” is a convenient untruth by which they dupe the useful idiots of the West; and that it is only Israel that stands for peace, justice and the rule of law.

Alas, though, the Jewish community itself won’t stand up and tell the truth about the Jews’ unique rights to all the land (whether or not Israel actually wants it all), the legality of all Israel’s actions or the hysterical Jew-hatred spewed out by the Palestinian Arabs without remission.

Indeed, given the Palestinian Authority’s repression of its own dissenters, its incitement to murder Israelis and steal their land and its Nazi-themed demonization of the Jewish people, the question that might properly be raised is whether there’s a moral duty to boycott the Palestinians.

But instead of saying any of this, the Jews are mostly divided between those who believe these lies themselves and those who know they are lies but are too terrified to say so.

Until and unless the Jewish world starts properly exposing the falsehoods and demented anti-Semitism that are driving the vilification of Israel, boycotting the boycotters will always leave the defenders of truth, justice and sanity behind this particular murderous curve.

Melanie Phillips, a British journalist, broadcaster and author, writes a weekly column for JNS. Currently a columnist for “The Times of London,” her personal and political memoir, “Guardian Angel,” has been published by Bombardier, which also published her first novel, “The Legacy.” Go to melaniephillips.substack.com to access her work.