← We Have Completed The Move In His Own Words, Kyle Rittenhouse → 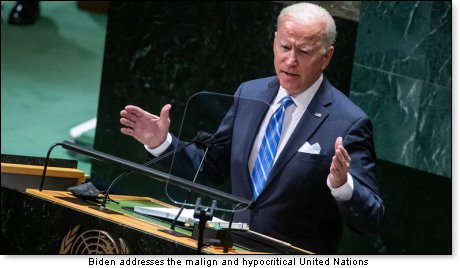 “Whoever commits a fraud is guilty not only of the injury to him whom he deceives, but of the diminution of that confidence which constitutes the existence of society.”

Joe Biden’s disastrous term these last ten months as President of the United States shows no signs of his or his Marxist and Islamist handlers surrendering to sense and sensibility. On the contrary, soon after engineering America’s defeat at the hands of the Taliban and while giving the Islamic and jihadist barbarians the entire territory of Afghanistan, plus the attendant criminal gift of $86 billion of the most sophisticated U.S. weaponry left behind, he washes his hands of the horrors the Taliban now again inflict upon Afghani women and upon young girls over the age of nine.

Biden is now contemplating a fraudulent ‘peace agreement’ with North Korea and yet further concessions to the Islamic Republic of Iran. If that is not enough, consider the growing belief in Washington that when the crunch comes and Communist China violently ends Taiwan’s independence there will be no support from the Biden administration. Nor will there be any American intervention when and if Putin decides to invade Ukraine. Meanwhile Biden’s Democrat Socialist Party is celebrating the passage of its destructive social spending program which contains 47 very bad measures that promise domestic horrors upon American citizens even as he spends trillions of U.S. dollars that lead us to an inflation spiral and national poverty.

President Biden, it is now becoming crystal clear, fully embraces the twin evils that exist within what has become the delusional Socialist Democrat Party. Those evils are Marxism and Islamism.

President Biden, when he was Vice President to Barack Hussein Obama, worked diligently for his master for eight long and baleful years from the time President Obama proclaimed that he was here to fundamentally change America. And so Obama did to our great misfortune. Now Biden eagerly continues the same delusional policies as he listens through his earpiece to what his Islamist and Marxist America-hating handlers say he must say and must do.

Unfortunately Joe Biden increasingly is controlled by the likes of the new American Democrat Congressional Representatives, Alexandria Ocasio-Cortez, Rashida Tlaib, Ilhan Omar, and their various other Left of Lenin dhimmis and fellow travelers.

Imagine if this new iteration of that lamentable and inexcusable slogan by Neville Chamberlain – “peace in our time” – in which the British Prime Minister betrayed Czechoslovakia in 1938, is repeated this time with the monster who runs North Korea. Will it give America, and what is left of the free world, any comfort. It will not, but it surely will mean the removal of U.S. forces from the Korean peninsula and bring South Korea and its people under hideous Communist submission. Imagine also the poisoned fruits of Biden’s increasing betrayal of embattled Israel.

Recently the Biden Administration ratcheted up adverse pressure on Israel by egregiously abstaining from voting against a blatantly Islamist inspired anti-Israel resolution in the United Nations. It was President Obama who had also deliberately abstained from voting against Resolution 2334 on December 23, 2016, which attacked Israel’s lawful building in villages and towns throughout its ancestral and Biblical homeland.

Israel justifiably accused President Obama at that time of secretly orchestrating the passage of the resolution as his parting anti-Israel shot or, as some have characterized it, his “parting punch.” Now Joe Biden has delivered another U.S. abstention in the face of the latest hostile Arab resolution against our ally, Israel.

To his credit President Trump defended Israel in that swamp, which is the immoral and hypocritical United Nations. But to his undying shame, President Biden has made a concerted effort to return to the bad ways and policies of President Obama. Israel cannot rely on America to help her at the United Nations. Nor, it is becoming clear, can Taiwan, South Korea and the Ukraine. Who knows which of America’s other faithful allies in the world will be betrayed by President Biden and his handlers.

President Barack Obama, with then Vice President Biden, gave the mad mullahs of the Islamic Republic of Iran the keys to nuclear weapons followed by billions of dollars in cash flown in during the dark of night. Now Iran edges closer to the Bomb and imperils Israel and ultimately America itself. As mentioned, there is now speculation that Joe Biden will not come to the aid of Taiwan which is in the sights of Communist China. Three nations and allies of America, Israel, Taiwan and South Korea, are all in growing danger thanks to the bizarre foreign policies of both Presidents Obama and Biden.

The humiliating collapse in Afghanistan is not a mystery. It was the product of a deliberate strategy to maintain relations with the Taliban at any cost. Every step of the disaster was really a betrayal of America and this is the same phenomenon that we have seen before with Obama and the Iran nuclear deal, along with the current perfidious support by Biden of the PLO and Hamas terrorists as they wage their relentless Islamic inspired war against the Jewish State.

To its credit the UK has now outlawed every aspect of the Hamas terror organization as it heaps misery on the Arabs of Gaza. They endure horrific repression under occupation by the Hamas terror regime. Will Joe follow Britain’s example and outlaw Hamas? I think not.

The Biden administration could not be trusted to keep Americans safe in Afghanistan. It has been suggested by various commentators that there are strong indications that thousands of Afghanis, many of them Taliban jihadis, are entering the United States through the open southern ‘border.’ Why then should the Biden regime be trusted to keep Americans safe from Islamic terrorists in this country? Was not 9/11 enough?

President Trump worked to bring real peace to the Middle East between Israel and the Arab world. He realized that an illusory peace was not attainable with the Arabs who call themselves Palestinians because of their rejection of multiple peace offers by Israel and the incessant calls by Hamas and the PLO to exterminate the tiny and reborn Jewish state. Instead, President Trump moved the U.S. embassy to Israel’s eternal capital, Jerusalem, and pushed for normalization between Israel and the Arab world, which resulted in the Abraham Accords.

The destructive influence of the Marxist and Islamists in the so-called ‘Squad’ is now pushing Biden to attempt the division of Israel’s capital, Jerusalem, by creating an unnecessary extra consulate for the Arabs who call themselves Palestinians who have an existing consulate in Ramallah. If President Biden truly knows his Bible, he might wish to read again Genesis 12:3.

The Islamic Republic of Iran has profoundly evil designs against both Israel and the United States. Biden’s shameful policy towards Israel is akin to his policy for our America, intended in each case, to scrap history and rewrite it for the Woke/Progressive cause. Domestically and internationally he is well on his way to creating a nightmarish fraud. Samuel Johnson would certainly agree.

As with everything else President Donald J. Trump did for America and our allies, Biden’s malignant foreign and domestic policy team is determined to reverse all of Trump’s noble efforts.

Victor Sharpe is a prolific free-lance writer and author of seven published books, including two collections of short stories along with a delightful children’s story and coloring book. He is also the author of the acclaimed four volume work titled, Politicide, which details the 1,400 year old Islamic assault upon Judeo-Christian civilization