A Look Back At The First Disastrous ‘Two-State Solution’

← What is Better with Biden? The Pathology of Liberalism →

An article by my friend, Victor Sharp that is honest and true

“It is not from 1947 or 1967 that the relentless aggression against Israel by the Arab and Muslim world or the so-called Palestinians began. To fully understand its origins, we must go back to the early years of the 20th century.”

In the 11th hour and 59th minute of his miserable term in the White House, Barack Hussein Obama struck his knife deep into the heart of the embattled Jewish state.

With the appalling anti-Israel passage of U.N. Security Council Resolution 2334, engineered by President Obama and Secretary of State Kerry on December 23, 2016, the blame for the Israel-Palestinian conflict was falsely imparted upon the easy target: Israel and the so-called “settlements.”

There were no “settlements” before the June, 1967 Six-Day War, when the Jewish state survived yet another Arab war of genocide launched against it and freed the embattled nation from the existing 1947 nine to fifteen mile-wide armistice lines, which Israel’s earlier minister of foreign affairs, Abba Eban, appropriately called the Auschwitz lines. These were the lines that existed after the fledgling Israeli forces had pushed back the invading Egyptian, Jordanian, Syrian, Iraqi, and Lebanese armies.

It is not from 1947 or 1967 that the relentless aggression against Israel by the Arab and Muslim world or the so-called Palestinians began. To fully understand its origins, we must go back to the early years of the 20th century.

In 1920, Great Britain was given the responsibility by the League of Nations to oversee the Palestine Mandate after the ending of the 400 year old Ottoman Turkish Empire’s occupation of much of the Middle East. Britain was to uphold the League’s express intention of reconstituting within the Mandatory territory a reborn Jewish national home.

The League of Nations created a number of articles in line with the original intent of the Balfour Declaration of November 29, 1917. At the last minute, however, a new article was introduced by the British Colonial Office: Article 25.

It became apparent that its inclusion directly enabled Great Britain in 1921-22 to tear away all the vast Mandatory territory east of the River Jordan and give it away to the Arab Hashemite tribe: The territory to become Trans-Jordan, led by the emir Abdullah.

British officials claimed that the gift of Mandatory Palestine east of the Jordan River was in gratitude to the Hashemites for their contribution in helping defeat the Turks. However, T.S. Lawrence (Lawrence of Arabia) described in derisory terms the Hashemite role as “a side show of a side show.”

Ironically, Britain was aided far more by the Nili underground movement in defeating the Ottoman Turkish Empire, which had ruled geographical Palestine for 400 years.

This was the first partition of the non-state geographical territory known as Palestine and the first two-state solution. It created a new Arab entity some 100 years ago called Trans-Jordan, covering some 35,000 square miles, or nearly four fifths of the erstwhile Palestine Mandate. Immediately, Jewish residence in this new Arab territory was forbidden in an act of Islamic apartheid, and it is thus historically correct to state that Jordan is Palestine. Note too that Jordan’s population is comprised of over 75% Palestinian Arabs. 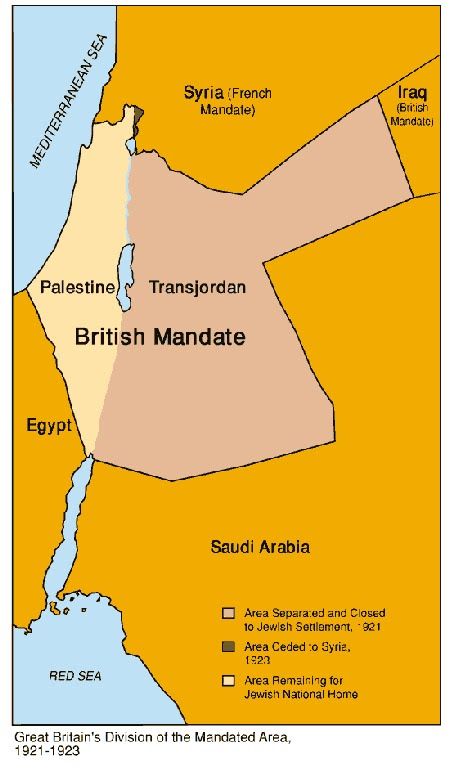 In 1923, the British and French colonial powers also divided up the northern part of the Palestine Mandate. Britain stripped away the Golan Heights (with its ancient Biblical Jewish roots) and gave it to French-occupied Syria.

The Balfour Declaration issued by Lord Balfour, British foreign secretary, never envisaged that the Jordan River would be the eastern boundary of the reconstituted Jewish homeland.

As early as September 19, 1919, the London Times newspaper had thundered in an editorial: “The Jordan will not do as the eastern frontier of Palestine[.] … Palestine must have a good military frontier east of the River Jordan[.] … Our duty as Mandatory is to make Jewish Palestine not a struggling state but one that is capable of vigorous and independent life[.]”

During its administration of the remaining Palestine Mandate’s tiny territory, between the Mediterranean and the Jordan River, (a mere forty miles in width) Britain severely restricted Jewish immigration and purchases of land while turning a blind eye to massive illegal Arab immigration into the territory from neighboring stagnant Arab territories. This had been Britain’s policy since it was given the Mandate from 1921/22 up until 1947 and Israel’s subsequent independence in 1948.

Britain’s sorry record of appeasement of the Arabs, at the expense of Jewish destiny in the remaining tiny territory, culminated in the infamous 1939 White Paper, which limited Jewish immigration to just 75,000 souls over the next five years. This draconian policy, coming as it did on the eve of the outbreak of World War 2, was a deathblow to millions of Jews attempting to flee extermination by Nazi Germany.

Britain’s mismanagement of the Mandate finally led to the United Nations’ Partition Plan of 1947. The Jewish Agency reluctantly accepted this additional dismemberment of what was left to them of the promised Jewish national home in Mandatory Palestine.

They did this to provide a refuge for the surviving Jewish remnants of the Holocaust and for the over 800,000 Jewish refugees being driven out of their homes throughout the Arab world. In contrast, the Arab regimes rejected the Partition Plan. Then, as now, they worked against the existence of an independent Jewish state. Only since President Trump’s espousal of the Abraham Accords have several Arab states embraced diplomatic relations with Israel in addition to Egypt and Jordan.

However under the new Biden- Harris regime, the Accords may not survive the Democrat/Socialist Administration’s evolving policies and already these new ‘Arab friends’ in the Gulf are falsely blaming Israel for the Arab rioting in Israel’s capital city, Jerusalem, perpetrated at the urging of Mahmoud Abbas, the leader of the terrorist Palestinian Authority and now aided by its Islamist rivals, Hamas and Islamic Jihad. Both these Gaza based terrorist gangs have, at this time of writing, launched over 600 deadly missiles into Jerusalem, Tel Aviv, Ashkelon and the tiny town of S’derot, which alone has endured over 10,000 missiles from Hamas occupied Gaza during the last ten years.

The great journalist, Caroline Glick, summed up the reality of the latest Arab aggression launched against Israel in a recent article. She began as follows:

“Throughout the month of Ramadan, the Fatah-controlled Palestinian Authority and Hamas have been inciting Arab Israelis in Jerusalem and throughout the country to attack Jews. And so it happened that at the outset of the month, Jews in Jerusalem, Jaffa and beyond found themselves beset by gangs of Arab thugs who beat them on the streets and light-rail cars just because they were Jews.

“Last week, Hamas’ leaders announced their detailed plans to open a new campaign against Israel on May 9. That date was a conflation of three events: Jerusalem Day – Israel’s national holiday celebrating the unification of Jerusalem in 1967; Muslims marked the holiest day of the month of Ramadan, and Iran marked its own Jerusalem Day, whose purpose is to call for the destruction of Israel and end Jewish rule in its capital city, Jerusalem.”

Israel was officially reborn as a sovereign nation in 1948, and its 600,000 Jews fought to survive the massive onslaught by five Arab armies, which intended to wipe out the Jewish state.

In 1948, Trans-Jordan, now renamed the Kingdom of Jordan, joined the other Arab nations in invading the Jewish state. Its British led Arab Legion drove out the Jewish inhabitants from east Jerusalem, the Jewish Quarter and the Old City, annexing the Biblical and ancestral Jewish heartland of Judea and Samaria and renaming it the ‘West Bank.’ Only Britain and Pakistan recognized that illegal annexation.

Israel foolishly offered to give away newly liberated Judea and Samaria and the Temple Mount, Judaism’s holiest site, to the Hashemite regime in Jordan in the hope that a full and lasting peace could be established. But the Arab League, meeting in Khartoum in August 1967, delivered their notorious three nos: no peace with Israel, no negotiations with Israel, no recognition of Israel.

It is within the narrow territory remaining for the Jewish state, which includes the more than 3,500 year old ancestral and Biblical Jewish heartland of Judea and Samaria, that much of the world now demands the establishment of a fraudulent Arab state to be called Palestine – a state that has never existed before in all of recorded history.

Here then would be the next so-called two-state solution, which would dismember what is left of Israel and drive hundreds of thousands of Jewish residents from their homes, villages, and farms – what a hostile world calls by its pejorative description, “settlements.” Why? Because just as in Jordan, Jews will not be permitted to live within Muslim claimed Arab territory, while Muslim Arabs can remain free to live within Israel.

The searing tragedy is that a second two-state solution may presage for the Jewish people yet another Final Solution – the German Nazi regime’s euphemism for the Holocaust.

The fact is that this is not a dispute over borders. This is a religious war, and the Arabs, so long as the overwhelming majority remain Muslim, will never accept the existence of a non-Muslim state in territory previously conquered by them in the name of Allah.

Nearly 100 years ago, the original two-state solution was enacted in infamy. Certainly, the Obama-Biden administration, consumed as it was by Obama’s anti-Israel animus, was equally infamous during its baleful two terms in office. Now, it is increasingly obvious, the present Biden-Harris regime will act towards embattled Israel in a similar policy of ignominy.

Victor Sharpe is a freelance writer and author of seven books including the acclaimed four volume, Politicide