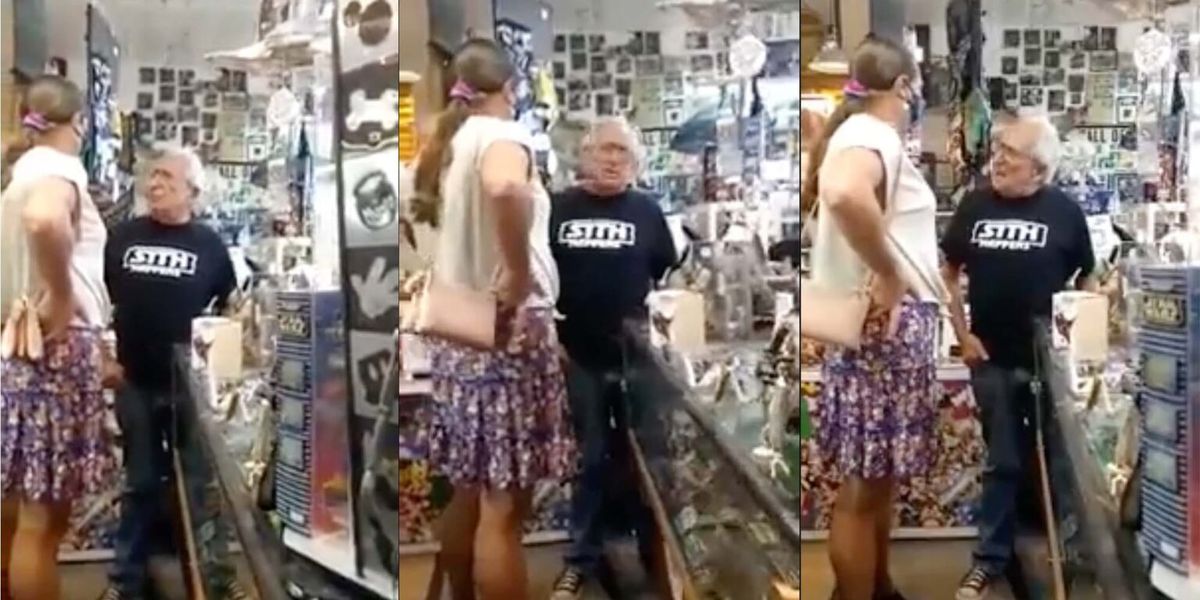 An altercation between an Aberdeen, Washington, business owner and a transgender council member made headlines after the two engaged in a screaming match over a sign in the business owner’s shop that reads “If you are born with a d**k, you are not a chick.”

What are the details?

According to a Thursday report from KING-TV, Council member Tiesa Meskis, who identifies as a transgender woman, confronted Sucher & Sons Star Wars Shop owner Don Sucher over what Meskis said was a transphobic and bigoted a sign hanging in Sucher’s store.

The exchange between the two was captured on video and soon went viral.

“I think you need to look in the mirror when you say that,” Meskis fired back.

Sucher stepped back and gestures toward Meskis, saying, “Well look at yourself, for Christ’s sake. … You are not a f***ing chick! Do you still have a d**k? ‘Cause if you do, guess what—”

Meskis responded, “You know what, that is none of your f***ing business.”

“Do you think that there’s one person who really thinks that you’re a chick?” Sucher continued. “Nobody confronts you, that’s the problem. Why are you doing this?”

“This is who I am,” Meskis seethed.

Sucher said that Meskis makes him uncomfortable and told the trans woman to leave the store.

“Trans women are women!” Meskis shouted back in defiance and began chanting the phrase from the sidewalk outside of Sucher’s store. The two continued shouting at each other for several more minutes before Meskis walked away shouting, “Stop staring at my ass!”

Meskis told KING, “What he wrote [in the sign] was so demeaning and so dismissive of who I am, who any trans woman is.”

“I don’t care what they do, but don’t come in here and complain to me about stuff,” Sucher told the station. “I have free speech.”

Both say that they have received messages of support from around the country.

“Everybody’s loved it,” Sucher said about the sign. “Everybody’s taken pictures of it. … I don’t give a [expletive] about feelings anymore. I went to Vietnam to fight for all this [expletive]. Do you think I care about something [expletive] feeling? Absolutely not!”

Meskis said that her supporters plan to demonstrate at 10 a.m. Saturday outside of Sucher’s store.

Anything else to know?

Apparent supporters of Sucher took to Google to leave glowing reviews for the elderly business owner.

One reviewer wrote, “Thank you for taking a stand against this misogynistic war. You are speaking reality and for the majority!”

Another added, “Great experience and an excellent owner — and Vietnam Veteran — who stands up for what he believes in (which is medically-accurate reality). If you like keeping your sci-fi as entertainment, rather than letting the delusions of the mentally unhinged bleed into the real world, support Normals.”

“Here from NY just to show support for great Americans such as yourself. Thank you for being you, Sir!” another reviewer added.

At the time of this reporting, Sucher’s store has received more than 1,700 reviews tallying up to a 4.8 out of 5 rating.