Heaven and Earth or The Temple And The Field 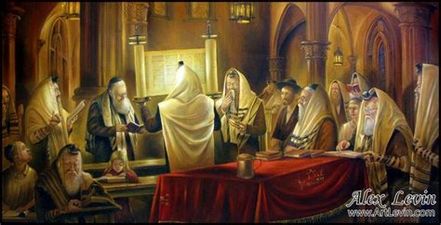 It was never my intention to deconstruct the biblical teaching, Christian sermons and Sunday school lessons of the last 44 years. I had never equated learning the bible from scholars, historians and academia. What I did was give my life to Jesus, found a church to attend and spent the next forty years confused (as I searched the scriptures) A prevailing thought/question, which was at the heart of my confusion was, ‘Why don’t we know what the Jews know as we read the books that they wrote?’

For years I would listen to pastors summarily toss the biblical Jews of the first century “Under The bus” and then proceed to read the writings of the Jews who became Christians. Those Jews must have got it but, the balance of the Jewish people were, as they would often share– blind!. The Jews who became Christians where sort of like Scrooge (of the Christmas tradition) who was converted to something better via a couple of ghosts! When considering Scrooge I would see the blatant antisemitism being promulgated through the writings of Charles Dickens [1843]

Ebenezer: Ebenezer as a boy’s name is of Hebrew origin, and the meaning of Ebenezer is “stone of help”. Biblical: name of a memorial stone set up by the prophet Samuel to mark a critical battle and victory in Jewish history.

In 2007 the antithesis of all that I had learned as a struggling Christian happened, GOD answered a forty year old prayer.

I learned that Heaven was more about the Temple and place of GOD’s presence in the earth. I learned that the word Garden was more about the Temple and Gardener more to do with Kings. I started learning from academia about the historicity of biblical characters as opposed to stories used to address pastoral sermons. Through Professor John Walton I learned more about ancient languages and how words had different meanings than our English translations. I started learning about the myriad of meanings within the 22 Hebrew letters, Paleo-Hebrew or drawings of the ancient world. When I started learning about Suzerain-Vassal legal definitions and ordered laws of ancient Mesopotamia the bible exploded with information that honestly, I had never heard in churches

I watched the following presentation by Professor Sheila McGinn:

Covenants in the Ancient Near East Sheila E. McGinn, Ph.D.

A door opened for me to better understand the legal ramification of the book of Deuteronomy. I started seeing as governmental questions concerning the jurisprudence of ancient covenants. I began to see the Jesus of the church as a King with legal obligations in resurrecting the Davidic Kingdom and promised governance. The modern religious exegesis started to fade and become inconsequential. I started seeing our modern world as a product of the ancient world