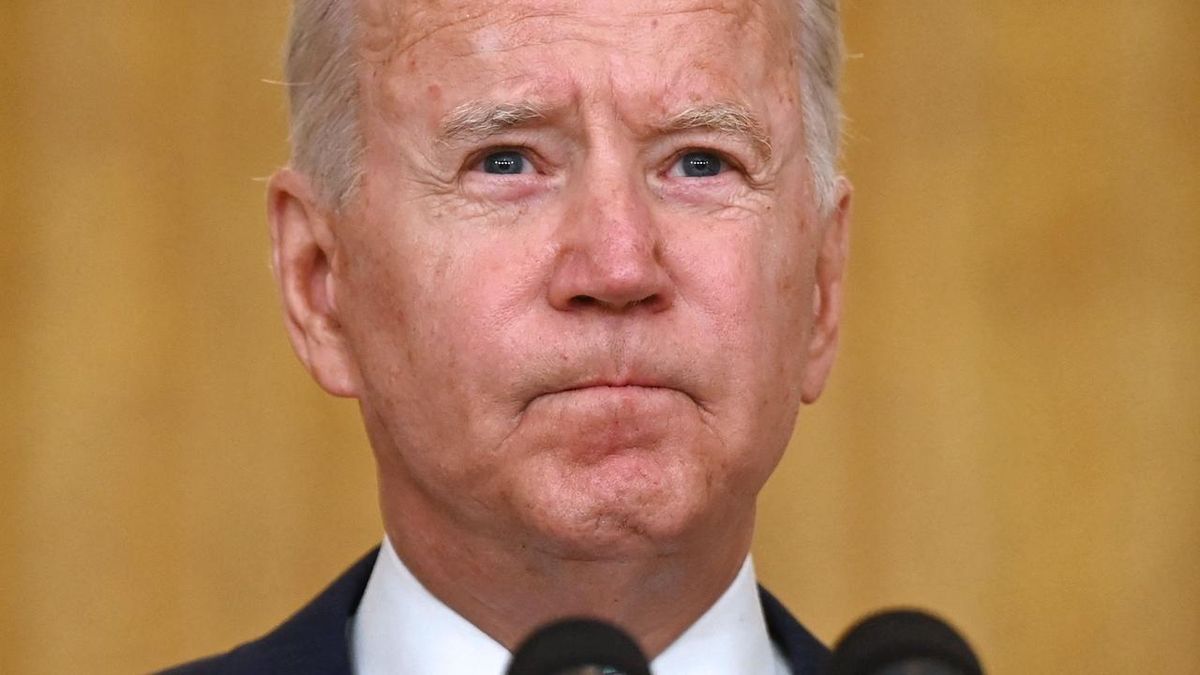 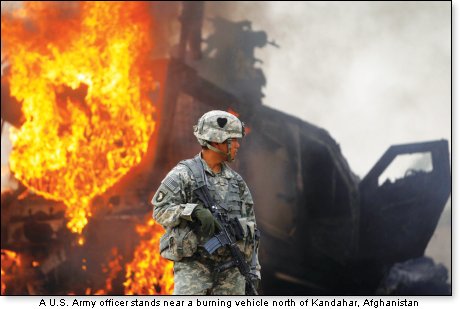 The mastermind of the 9/11 Islamic atrocity perpetrated against the United States, Khaled Sheikh Mohammed, once told his CIA interrogator words of consummate evil. The blind sheikh said:

“While the United States may enjoy some fleeting battlefield successes, in the end we will win because Americans don’t realize that we do not need to defeat you militarily; we only need to fight long enough for you to defeat yourself by quitting.”

Two decades after September 9, 2011, and almost on the anniversary of that hideous act of Islamic barbarism which murdered nearly 3,000 Americans and destroyed the iconic Twin Towers in New York City, Joe Biden has made KSM’s evil prophecy come true. And ironically the day after Biden last April announced that he was taking all U.S. troops out of Afghanistan, his malign handlers in the Administration announced that the U.S. was instead increasing the number of U.S. troops in Germany. In other words, here was Joe Biden removing U.S. forces from a country in which a major terrorist threat existed and sending them to a country where a once Soviet threat no longer exists. But it gets worse – much worse.

According to Anni Cyrus in the Glazov Report, President Biden was literally begging the Taliban not to occupy or destroy the American Embassy in Kabul. He was doing this by offering US tax payer aid to the Taliban monsters – the Islamic enemy of the United States, of the West and of Judeo-Christian civilization itself.

Let us not forget that since this baleful Biden administration assumed power, the Gitmo Islamic terrorist detainees were transferred to prisons in Afghanistan. Those dangerous prisoners have now all been released by the Taliban. All of the ISIS Islamic terrorists whom we had captured in Iraq and Syria who had also been put into those same prisons are also now also free to commit their horrific acts upon women and young girls throughout Afghanistan. Indeed Sean Hannity reported that the Taliban are forcing women and girls in Afghanistan from the ages of 15 to 40 to become sex slaves to Taliban fighters while other women not wearing burkas are being shot dead.

Acts of frenzied terror have been unleashed by the Taliban. What horrors they are now committing in Afghanistan mirror the summary executions by other Muslim jihadi terrorists in Iraq and Syria of Christian women and children buried alive, of people crucified, of American journalists beheaded and of the enslavement and mass rape of Yazidi women by the Islamic State – all atrocities perpetrated to the sound of the chilling Arabic war cry, Allahu Akbar, (Allah is Greater).

Biden has admitted that when he was Vice President during the malignant Obama regime, the complete U.S. withdrawal from Iraq which he – Biden – supervised, was a mistake. But worst of all, Joe Biden incredibly since then has tied the U.S. retreat from Afghanistan to occur on the exact 20th anniversary of the 9/11 attacks – turning that solemn day of remembrance into a victory celebration for the Muslim jihadis and terrorists. It is a victory Khaled Sheikh Mohammed predicted from the start. We may tragically see on the TV news, Islam triumphant on the very anniversary of 9/11. Thank you, Joe!

As China, Russia, Iran and others now gleefully watch America’s humiliation in Afghanistan they are rising to the occasion like circling sharks sensing blood in the water. The grotesque and shameful policy failures of the Biden/Harris administration and by its malevolent handlers now signal a post-American world order which imperils America’s loyal allies: Taiwan, Israel, Japan, India, the Ukraine and many others.

It is easy to see who is driving this growing and disastrous collapse of American power throughout the world, one in which America was once respected but in which the U.S. is now humiliated. Even worse than the demeaning departure from Vietnam, with the attendant slaughter of perhaps a million or more South Vietnamese by the Communists, the catastrophe we now witness in Afghanistan is fomented by the growing and aspersive influence of the Islamo-Marxist Squad and the so-called Progressive Democrats who now exert undue influence within the increasingly Democrat Marxist Party.

The ingrates and hate filled women of the Squad willingly ignore the 1,400 year old violent, despotic and internecine Arab and Muslim history. At the same time, they eagerly embrace anti-Western rogue creatures such as the rulers of Iran, members of the Muslim Brotherhood, of Hamas, Hezbollah, Islamic Jihad and the Palestinian Authority. They do this irrespective of the fanatical and repressive ideology of Muslim Arab history which has led to barbaric terrorism, hate-education, repression of women and the demonic ambition for Islamic world conquest. Expect the Squad to be celebrating with the Taliban in the days to come as America remains hostage to the Biden/Harris malignancy.

It is now clear that the Taliban planned a massive offensive, unlike anything seen in the past, likely with foreign intelligence and other support, after having sent delegations to Russia, China, Iran, Qatar and Pakistan – countries hardly friendly to the United States.

There will be grim consequences from Biden’s miserably failed policies in Afghanistan. Insurgent and proxy groups backed by Iran, Turkey and others will increase global chaos throughout the Middle East and beyond. That is why, for instance, Iran feels it has free rein to attack ships off the coast of Oman. These incidents are no doubt linked to the rise of the Taliban in Afghanistan which is now free again for jihadists to plot mayhem throughout the West and against Judeo-Christian civilization. 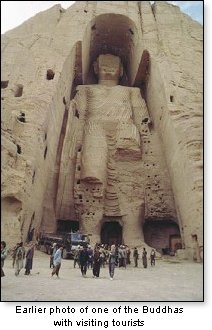 FOOTNOTE: Many of us witnessed on our television screens the appalling crime against history and civilization perpetrated by the Taliban last March, 2001 when they destroyed the 2,500 year old archaeological and religious Buddhist monuments.

Buddhist missionaries when traveling the Silk Road millennia ago had carved two giant Buddha statues into the soaring mountain cliffs of the Bamian Valley about 70 miles northwest of Kabul. The two standing Buddhas, 180 and 121 feet tall, survived invading armies for 1,500 years. The statues stood the barbarism of Genghis Khan but couldn’t stand the modern barbarism of the Taliban.

This echoes that other hideous Islamic outrage perpetrated by the barbaric Arab and Islamic Waqf when it destroyed irreplaceable Biblical Jewish antiquities on Jerusalem’s Temple Mount. These artifacts dated back two to three thousand years to the period of the First and Second Jewish Temples. In March 2001, the Muslim Taliban used dynamite and artillery to destroy the Buddhist statues for what they said was violating their “Islamic order.” In 1999, approximately 9,000 tons of precious archaeologically-rich soil was bulldozed from the Temple Mount by the Islamic Waqf using heavy earth moving equipment. This was done by Islamists to try and obliterate the overwhelming proof of Jewish sovereignty and millennial history as well as later Judeo-Christian relics in the ancestral Jewish homeland

Victor Sharpe is a prolific freelance writer and published author. His seven books include two of his collected short stories, a delightful children’s story and coloring book, and his acclaimed four volume work titled, Politicide, which details the 1,400 year old threat against the West and Judeo Christian civilization from Islamic supremacism.